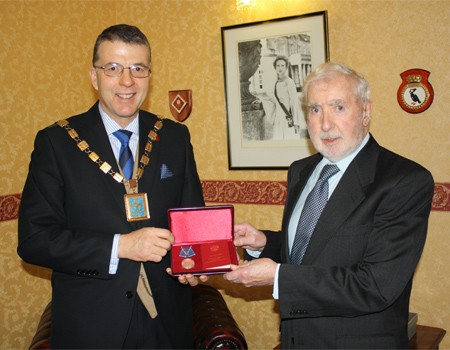 A Formby World War II veteran has been awarded a special medal from the Russian Government for his services in The Royal Navy and his part in the Arctic Convoys.

The Ushakov Medal is a military award created on March 3, 1944 by decision of the Supreme Soviet of the USSR. It was named in honour of Russian admiral Fyodor Ushakov who never lost a battle and was proclaimed patron saint of the Russian Navy.

It is awarded to sailors who have displayed courage in the course of defending Russia or its interests and British veterans have received the medal as thanks from the Russian government for their efforts in the Arctic convoys.

Harold, who was born Formby and still lives there, joined the Royal Navy in 1941 as an Engine Room Artificer until demob in 1946. He served on a number of ships and his Arctic runs were on the Frigate HMS Cotton which he joined at the beginning of 1944.

After the war Harold worked at Bruce & Hyslop engineers in Bootle for more than forty years and was happily married to Mabel until her death in 1999.

He was due to receive the medal in London at the Russian Embassy with other Arctic Convoy Veterans but sadly couldn't attend. Instead he was presented with it by the Mayor of Sefton, Cllr Stephen Kermode, at Bootle Town Hall.

"Thousands of allied seamen lost their lives as the British ships sailed in the unwelcoming, stormy waters of the Arctic ocean under constant threat of being attacked by German U-Boats and aircraft.

"What they did was very heroic and it is a great honour to present Harold with the Ushakov Medal - he is a man Sefton should be very proud of."

Harold said: "It is very humbling to receive the Ushakov Medal, many years after the end of the war.

"It has brought back many memories of my time in the Arctic as a member of the Royal Navy.

"We were not heroes, we were just doing our job for the war effort and this medal is as much for my Royal Navy friends and colleagues - many who are sadly no longer with us."

Local talent has been celebrated in Sefton Council’s first writing competition to coincide with the anniversary of the Magna Carta being signed. Run in partnership with the Liverpool Law Society, the 1000-word short stories had to be based on th... Read More